Awful cheese jokes aside, my mission to get through my storecupboard ingredients continues, with… can you guess?

I soaked the kidney beans overnight and cooked them the next day. I happened to have a jar of salsa in the cupboard so added them, as well as a small tin of sweetcorn to make the beans for my nachos. 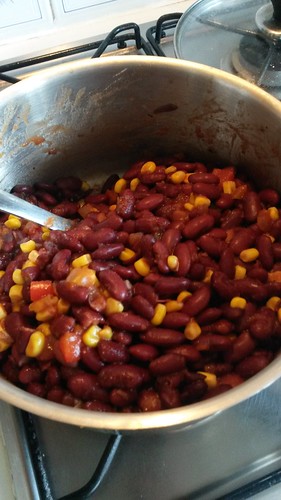 They ended up just like the tinned “chilli beans” I used to buy in NZ.

I also had some corn chips to use up (I was a victim of one of those “three for two” offers), perfect. Topped with cheese, a few minutes in a hot oven, and then some avocado on top: 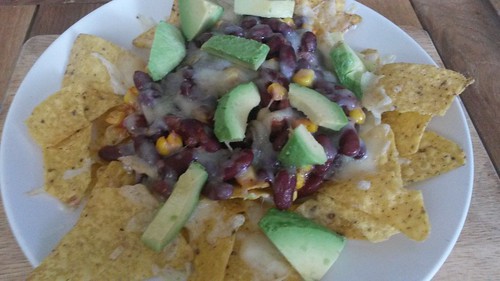 I still have a tin of corn left, but I have a plan for that – it will have to wait for next week now though. To check on my progress go here. I have some great ideas to use up the rest of the list, so stay tuned.

Does anyone else have any good cheese jokes?

… and my 500th post on Knit Your Own Yoghurt, just as an aside there!

I had a bit of jasmine rice left over from the Black Pepper Tofu the other day. I also had a bit of coconut milk powder to use up. I mixed the powder with some boiling water, poured it over the rice, and heated the lot up in the microwave.

I also used up the teriyaki sauce, cooking a piece of salmon in it. Some steamed broccoli on the side and I had a tasty and almost healthy meal. 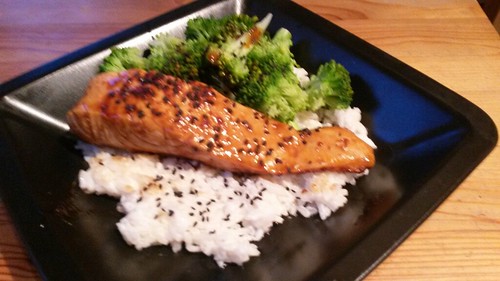 That’s three things checked off the list now, and a long way still to go!

Project Storecupboard is underway.  I thought I would ‘fess up and reveal the contents of my cupboard.  Hopefully making this public will help keep me on track!  I’ll update this as I use stuff up.

Too many to list and most are very useful, but I want to get rid of:

It really does feel quite shameful seeing it all written out like this.  But hopefully useful – does anyone want to join in?

I had my friend Steph around for dinner recently. We have realised we’ve known each other for almost twenty years now! Old friends can tell you the truth, and when I opened the cupboard to get some sweet chilli sauce out (we were eating The Londonder’s egg fried “rice”) she said “Sarah! You have way too much food!”.

She’s right. This week fellow blogger Foodstinct has been doing a “shop free week” and tweeting the tasty-looking results. I’d eaten almost everything fresh before going away, but inspired by his example I decided to have another crack at working my way through my excess storecupboard ingredients.

I’m moving home soon, so this will mean I have less to pack and hopefully I can save some money in the process. My first meal, the day I got back from holiday, was this: 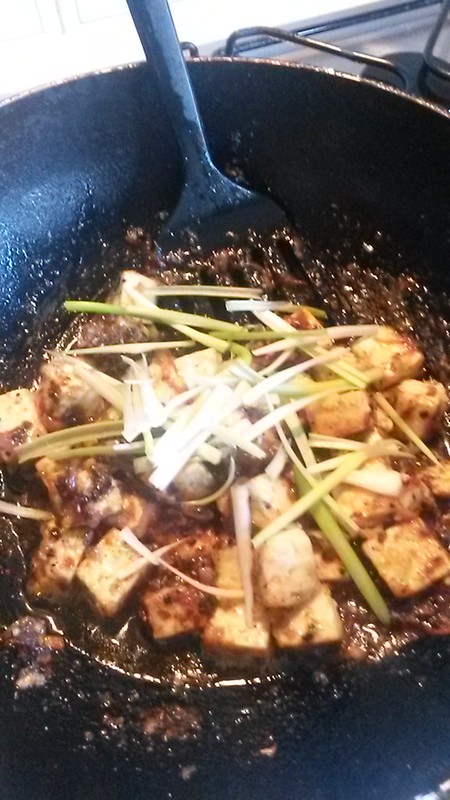 Ottolenghi’s black pepper tofu. I’d had some tofu sitting in the fridge for a while. There were a few spring onions in the bottom of the fridge, and I had just enough shallots too. I had a bottle of kecap manis (sweet soy sauce) but there’s still plenty left – any ideas? And I served it with some jasmine rice – not quite using it up, but stay tuned for my next post and you’ll see what I did with the rest.

I took a little holiday over the weekend. Long-time readers will know of my fondness for Northumberland, where I take part in archaeological digs at Vindolanda. This time I wasn’t there to dig but to visit my friend Erin, who is up there for a month excavating the Roman fort. I’m incredibly jealous.

On Sunday we explored an area with more recent history than the Roman occupation of Britain. Further along Hadrian’s Wall on the border between Northumberland and Cumbria we came across Gilsland Spa, a relic of a time when international travel was inaccessible to most people, but doctors recommended their patients “take the waters” at various spa towns such as Cheltenham and Bath.

We thought we might be able to get a cream tea in the Gilsland Spa Hotel, but a quick walk through its vast and maze-like interior confirmed it has gone straight through “faded grandeur” and into “shabby and dated”.

Paths lead down from the hotel, inviting the curious visitor to explore. 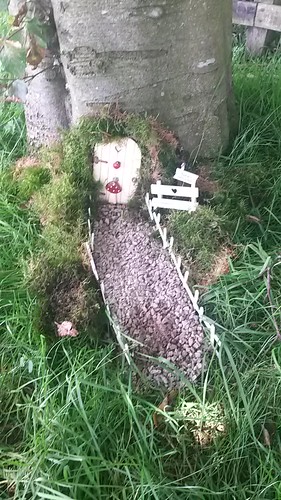 It seems the area also has some tiny inhabitants. 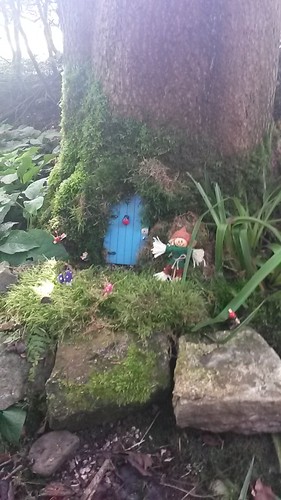 If only I could shrink myself like Alice and fit through that door!

The path leads down to the river. Crossing the river will bring you to the Popping Stone, where we met a family out for a picnic. The stone is a traditional spot for marriage proposals, and it was there that Sir Walter Scott proposed to his wife. The couple we met had become engaged at the Stone, and their two children conceived following repeat visits. Maybe it holds a bit of romantic magic? 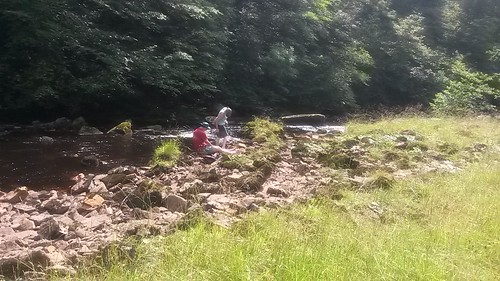 A paddle to cure aching feet on a hot day.

Further wandering and a keen sense of smell led us to the spa’s sulphur spring, where I “took the waters” and was instantly cured. 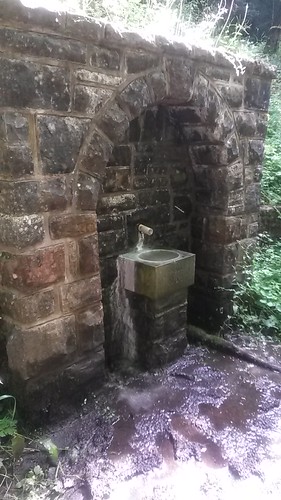 The path was lined with wild garlic, truly a feast for the senses!

We read that in Victorian times the river bank was lined with food and drink kiosks. The empty shell of a small building remained but it was difficult to imagine how this promenade would have looked a hundred-odd years ago.

Further along the path another curious shape caught my eye. 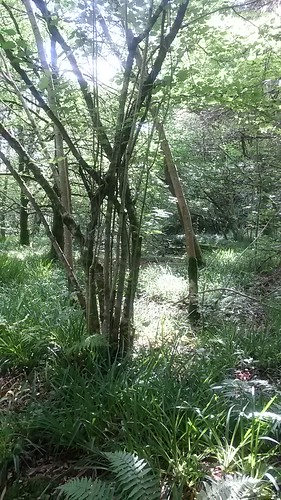 Can you see it? 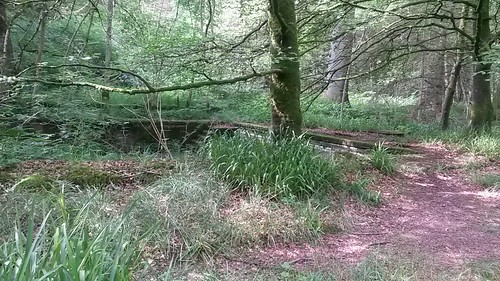 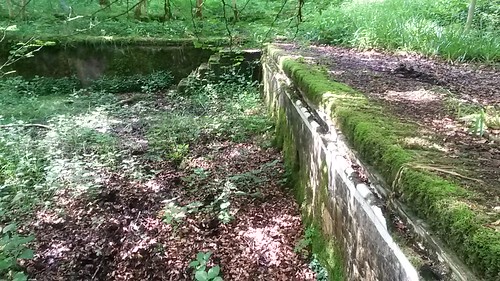 A crumbling Victorian swimming pool, in the middle of the forest.

What a magical place indeed! It makes me wonder what other secrets this semi-ancient woodland might possess. Perhaps I’ll discover them on my next visit North…