This recipe comes from my Ghanaian-British friend Penny, who made it when I went to hers for lunch one day.

I’ll just describe it loosely, as ingredients can be adjusted to taste. I had about 250g dried aduki beans to use up, so I boiled them for around 30 minutes until they were soft. While the beans were cooking I chopped and sautéed half of a large onion until soft – it was left over from something else so you could use a whole onion if you wish. I added a tin of chopped tomatoes and a roughly chopped scotch bonnet pepper (de-seeded). At this point I blended the lot together, making sure I got all of the pepper bits well blitzed. 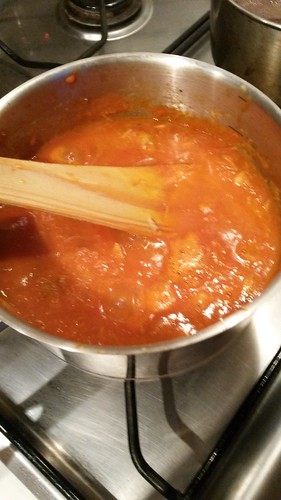 I had a fillet of smoked mackerel left over from this week’s lunches, and also a tin of mackerel – this is where my version differs from Penny’s as she wasn’t trying to use stuff up! I flaked these into the sauce and added the aduki beans. 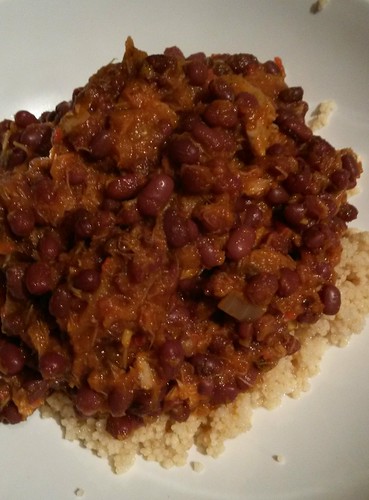 Served with couscous, because that is what I have! Ok, so it ain’t pretty, but it tastes great – especially with the spice from the scotch bonnet. Yes, a de-seeded scotch bonnet pepper, blended into a sauce is nothing to be afraid of – it adds a very pleasing warmth rather than blow-your-head-off heat.

There’s still some couscous left so I can’t check that off the list just yet, but this meal used up the mackerel and aduki beans (as well as the leftover onion) – and I had to buy a new tin of tomatoes.