Apparently this past weekend was the coldest August bank holiday on record.  I didn’t think it was as cold as all that actually – but on Monday the heavens opened and it didn’t stop raining all day.

Perfect weather for ducks…. and soup.  I like the way the changing seasons give an excuse for wearing cardigans and making comfort food.  So I made two soups over the weekend – the first, spicy lentil soup with squash, tomato and green beans, a Rick Stein recipe.  To be honest I didn’t think much of this – you throw the vegetables into the pot at the same time as the lentils, so they end up rather mushy.  I used split peas/chana dal instead of tur dal – one more thing used up (once I finish eating it that is – that’s work lunches for this week sorted).

I also made tomato, chickpea and coconut soup, from Love & Lemons (see their site for some really pretty food photography).  It was glorious, especially when eaten with some potato and rosemary sourdough from Gail’s. 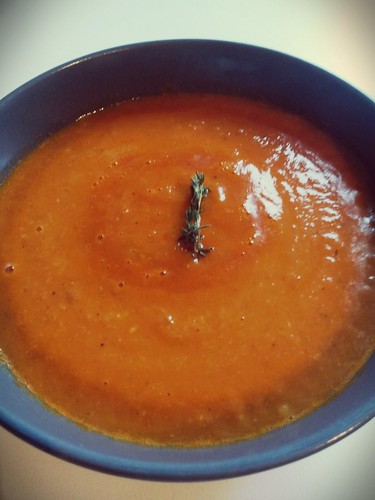 Ahem.  I was too hungry to bother much with garnishes.  This one’s definitely going into rotation.

I kept  little coconut milk back for another recipe I’m hoping to do this week, and I actually had to buy more chopped tomatoes, so with these two recipes I used up some tinned chickpeas and the split peas.  I also finished some spices like my smoked paprika and turmeric.

I’ve updated the list – the dried beans and tinned food are nearly all gone!