This is something I’ve not mentioned on this blog before. Let me start at the beginning. I’ve always had problems with my joints – Achilles tendinitis, sore hips, sore knees, and during my student years especially, sore fingers and thumbs. Eventually a name was given to this: hypermobility. My joints move too much due to super-stretchy tendons and ligaments, leading to pain in those tissues and in the surrounding muscle. One slight problem can have a flow-on effect and end up throwing my whole body out of whack.

Over the years I’ve learned self-management – for example, I never knew when I started dancing that it would be really helpful, so I ended up doing it for nearly a decade and becoming a dance teacher.

Two and a half years ago I found myself doing a lot of walking for work, and the old problems came back again. I got to a point where walking anywhere, even the mile down the road to work, was very painful. I got referred to physio and started doing the prescribed exercises religiously. I learned that physio can’t fix you but it can give you the tools you need to fix yourself.

So about six months after my injury I got peer pressured into joining my work running group. My physio said “you can run if you want to”. I’d always thought it was a prohibited activity for people with my propensity towards joint pain. But it turned out that with the right training I could do it. It was also 2012, that wonderful year of celebration and inspiration here in London and I caught the bug. I ran my first 5k in September 2012 in 37:30. A year later I ran the same 5k in 28:18 and won the “most improved” prize.

On top of my work running group I joined the GoodGym and the Lazy Girl Running 10k group. After completing the group I ran my first 10k, the London 10,000, in under an hour. I had a ball. 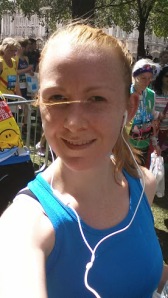 Yesterday I ran my first half marathon, Run Hackney. It was tough. It took me 2:22:37 to run, but it was a hard slog. The last three miles were particularly hellish, with hills, no shade, and hairpin bends. I had no adrenaline buzz, and no runner’s high after it finished, I was just tired. And hot. Today I found out I wasn’t the only one to think so, and that my time was perfectly respectable for a first half. I’m already planning the next one… I don’t know where it will be yet, but it won’t be in summer! 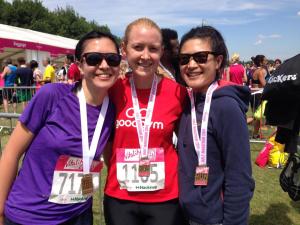 Next week I’m winding down with a 5k on Hampstead Heath – the Race for Life to be precise. I have very personal reasons for doing this race, which raises money for Cancer Research. It’s my only charity run this year. If you’d like to donate, the link is here: https://www.justgiving.com/sarahmoore60/

And if you didn’t think you could, have a go at running. Two years ago I thought I couldn’t run 5k and now I’ve run 21. If I can do it, I think pretty much anyone can!